Football fans, this is a super fun project that lasts throughout the football season.  Knit during the games or catch up during the week.

The Scoreboard Cowl is worked in the two (or three) colors of your favorite football team! 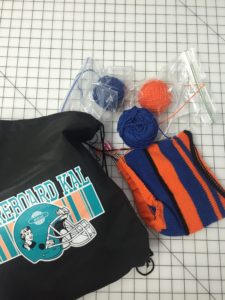 The idea behind the design of the cowl is fairly simple.  When your team scores, you will knit a round in the MC for each point attained.  Did they kick a field goal?  That would be 3 rounds.  Did they score a touchdown?  That would be 6 rounds.  Was the point after good?  Add another round!  Should the opposing team score on the subsequent drive, their points will be knit in the CC (following the same rules noted above).  You will follow this structure for the entire game, switching back and forth between the MC and CC depending on which team scores.  All rounds will be worked in knit stitch, except the optional, game-dividing, purl rounds.

When the season is over, you will be left with an AMAZING, wearable knitted record of your team’s 2016-2017 season in the Scoreboard Cowl!

THIS SEASON YOU WILL HAVE TWO DIFFERENT OPTIONS TO KNIT YOUR TEAM’S SCORE: